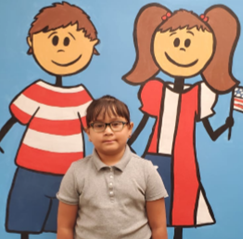 Student name: Maylene Renteria
School: Ed Pastor Elementary
District: Gadsden Elementary School District #32
Grade: 1st grade
Native language: Spanish Nominator
Name: Maria Camacho
Email: mcamacho3@gesd32.org
Title: Principal
Maylene is currently in 1st grade. She reclassified last year in Kindergarten, moving from Pre Emergent to Proficient in 1 year. Her Kindergarten teacher Mrs. Rodriguez, which nominated her for being a role model and not being afraid to speak in English. She loves practicing English at home with her younger siblings, watches TV in English and loves sining in English. She is not shy to try new things, is very social and very attentive in class. She is a fast learner, loves to participate in class and is always engaged. 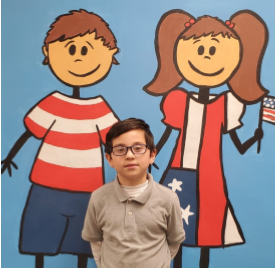 Student name: Mateo Valenzuela
School: Ed Pastor Elementary
District: Gadsden Elementary School District #32
Grade: 1st grade
Native language: Spanish
Nominator Name: Maria Camacho
Email: mcamacho3@gesd32.org
Title: Principal
Mateo is currently in 1st grade. He reclassified to Proficient in 1 year, moving from Pre-Emergent to Proficient, last year in Kindergarten. His teacher Mrs. Rodriguez was his Kindergarten teacher and he was nominated for always trying his best and be willing to ask questions to learn. He is very responsible, mature and a natural leader.  He moved to the states from Mexico last year with his family. He is always on task, listening to the teacher, participating and trying his best. Mateo wants to be a doctor for pets when he grows up. His family is very supportive, present at school events pushing him to his full potential and making him responsible for his education. 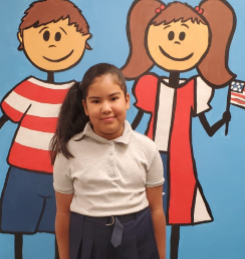 Student name: Naomy Aviña
School: Ed Pastor Elementary
District: Gadsden Elementary School District #32
Grade: 1st grade
Native language: Spanish
Nominator Name: Ana Fausto
Email: afausto@gesd32.org
Title: Master Teacher
The native language of Naomy is Spanish. She entered kindergarten in August 2018 . Her language level was pre-emergent. She became a proficient student on Spring of 2019. When Naomy entered Kindergarten, she only spoke Spanish. She struggled at the beginning with learning letters and letter sounds. The absence of her father, who migrants to other cities to work in the fields, affected her with her academics. However, she felt in love with the English language and she began choosing to speak English rather than Spanish. She overcame any obstacle that got on her way. She would like to be a teacher when she grows up because she wants to help other people learn English. She knows how much she struggled that she is willing to help others learn the language. Naomy is a very sweet, responsible student, who is always willing to help. She cares for her classmates. She helps those students who have not mastered the English language. She is very giving and friendly with her peers. She is a true model to
follow. Naomy is actively involved in our community. She participates in school events such as the parade, Carl’s Jr. take-over, and other school events and fundraisers. What makes Naomy unique from other students is that she does not have her father for part of the year. She has communication with her father through facetime. Yet, she does not let that impede her from succeeding in school. She knows that her father works very hard in the fields, and that her job is to come to school to learn and become educated. Therefore, she set the goal of making her parents proud, and she did when she became proficient in English.

Student Name: Noe B. Barragan Soto
School: Arizona Desert Elementary
Grade: 6th
Nominator Name: Ms. Hurtado
Title: Teacher
Dedication, commitment, and leadership characterize Noe Barragan. Noe begun his schooling at Arizona Desert Elementary with a placement score of PEEBS and ended his school year as a Proficient fifth grader. In the classroom, Noe exhibits collaborative skills, problem-solving skills, and self-directed learning. As a current sixth grade student, Noe presented a remarkable speech in front of his peers and teachers to run as Student Council president. He was elected. He is responsible for morning announcements, and displays outstanding communication skills. He is respectful and charismatic.